Push-push before the tournament in Ivana Yarygina.

Episode One of Daley Operation which takes a behind the scenes look at Paul Daley’s preparation for his bout against undefeated prospect Tyron Woodley at Strikeforce on 30.07.11.

Episode Two of Daley Operation which takes a behind the scenes look at Paul Daley’s preparation for his bout against undefeated prospect Tyron Woodley at Strikeforce on 30.07.11.

Episode three of Daley Operation which takes a behind the scenes look at Paul Daley’s preparation for his bout against undefeated prospect Tyron Woodley at Strikeforce on 30.07.11.

2011 Grapplers Quest at UFC Fan Expo Advanced Absolute battle between Oliver Mercier (H20) and Bruno Tostes (Renzo Gracie) on April 29th, 2011. GRAPPLERS QUEST, The World’s Largest and Most Prestigious Submission Grappling Tournament hosts Grapplers Quest at UFC Fan Expo in Toronto Canada on Friday & Saturday, April 29th & 30th, 2011. Grapplers Quest wants the sport of Submission Grappling to grow worldwide and with sharing this footage for free, we hope it will bring more people into the sport for many years to come.

Royler on his rematch with Eddie Bravo: “Lightning never strikes twice, nor kills the same horse”

This Wednesday in California Royler’s telephone was ringing off the hook. “What a bomb, huh?” said the black belt with a laugh, when he picked up a call from GRACIEMAG.com.

The subject was, of course, the September ADCC tournament in England and Royler’s supermatch against Eddie Bravo, the only man to ever submit him in no-gi grappling, with a triangle that came out of left field in the quarterfinals at ADCC 2003, in São Paulo. Eddie’s next match saw him lose to Léo Vieira by 15 to 0.

“Even though he beat me, every now and again I catch word that Eddie Bravo wants to go again,” said Royler. Perhaps Bravo’s wants a sequel to prove it was no fluke. “So I’ll let him have a rematch,” said the Gracie, jokingly.

The match contract hasn’t been signed, but to Royler it’s a done deal: “I spoke with Renzo yesterday and the folks in Abu Dhabi really want to put together these two matchups, so I feel it will go through. I’ve never been out of shape, but it’s always nice to have a good reason to train hard; it’s a match a lot of folks have been asking for and one I’d like to do too.” 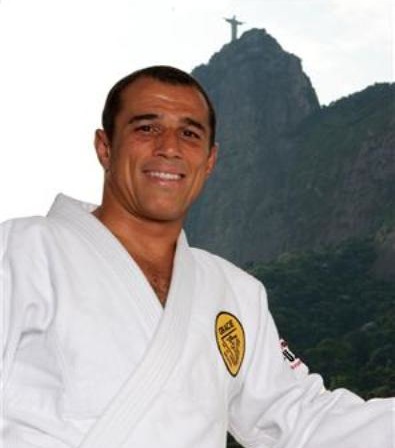 “I didn’t talk to Renzo about his plans for training, but we’ll discuss it; Renzo’s really strong right now, has been doing those grueling training sessions he likes so much, so I don’t think he’ll have too much difficulty, even if Zé Mario may be heavier. Renzo is always charged up, always putting himself to the test, so Zé Mario had best show up well trained, otherwise he’ll be biting off more than he can chew,” said Royler with excitement.

Now about his match with Bravo, might Royler fear having another lapse and getting blindsided with another submission? Royler was quick to respond: “Lightning never strikes twice in the same place, nor kills the same horse.”

Before bidding farewell, Royler commented on Royce’s return to the UFC. “I don’t know of any news; what we spoke about in Toronto was a potential matchup between Royce and Matt Hughes, but as Matt signed to fight Diego Sanchez, the idea was put on the back burner. As far as I know, he won’t be fighting in Rio,” the Gracie said in closing.

Eddie Bravo’s claim to fame, choking Royler Gracie for all he’s worth at ADCC 2003

It’s the rematch many expected would never happen. At the Abu Dhabi Combat Club No-Gi Submission Grappling tournament in 2003 Eddie Bravo scored the most significant win of his career by beating legendary grappler (from a legendary family) Royler Gracie via triangle choke. Eddie Bravo was thoroughly thrashed by Leo Vieira in the next match at that same tournament , but the Gracie win was so significant that Bravo has managed to use it to help make a career in being a Jiu Jitsu guru while pushing his take on the Rubber Guard and his 10th Planet Jiu Jitsu schools.

Since then efforts from both sides have been made to make a rematch happen but it has failed to materialise thus far for one reason or another. Now it looks like it might finally happen as the official ADCC Facebook page announced the match up:

Mario Sperry vs Renzo Gracie is a pretty great match up as well as both have been pioneers in the BJJ and MMA world with Sperry learning his craft under Carslon Gracie who was known for favouring the top game and almost having a wrestling mindset to the submission game which Sperry took with him when he co-founded Brazilian Top Team that has been home to the Nogueira Brothers, Ricardo Arona and Paulo Filho, to name a few. Sperry was also an early ADCC champion and Absolute (open weight class) champion in 1998. Renzo Gracie should need no introduction having found success in ADCC and MMA as well, his last MMA match being in Abu Dhabi last year against Matt Hughes.

As for the Bravo vs Royler rematch, Royler has still been competing where as Bravo has not competed since the ADCC 2003 tournament. Bravo can train seriously from now until September but just like last time I’d have to chose Gracie as the favourite. Should Bravo win again, don’t be surprised if we witness and ego explosion. I’m still somewhat dubious if this will actually happen, but it’s certainly the closest its come so far.