In this series, Coach Carl breaks down the Pistol movement into a number of progressions to develop the one-legged squat. We’ve talked about adding the Candlestick Roll and using its momentum as an assistance to the Pistol, but now Carl is on to exploring the strict version of the Pistol and exploring why it is so challenging for some athletes.

Pt.1
In this first video, Carl demonstrates a number of quick tests and drills to diagnose and challenge the athlete with regards to balance, strength, and mobility for the Pistol. Just like any other movement, as soon as we remove a point of contact and decrease the base of support, we instantly increase the difficulty as there are more degrees of freedom and less stability. When this happens, we need to go back to check that our movement mechanics are solid before removing the point of contact, and in this case we have to test to make sure our Squat and Lunge mechanics are solid before we attempt the Pistol.

In this segment Carl begins by reviewing proper squatting mechanics and positions for a normal two-legged squat. Carl explains the need to change orientation in order to engaging the posterior chain in order to stand up, and also emphasizes the need to drive the knees out in order to keep the shin vertical to avoid stress and shear on the knees while squatting. Finally, Carl progresses to the next drill which is to do step-ups onto a box.

In this video, Coach Carl continues to continues to use the step-up on the box to discuss the rotational component of the Pistol. Carl then moves to the side of the box and steps up and down with a hanging leg to a small swing to find balance and full range of motion in the hips for the squatting leg.

In this series, Carl will break down the progression for the Glide Kip with our special guest James. In this first video, James demonstrates the movement while Carl breaks down the individual components, starting with the initial swing.

In this video, Carl and James move on to the next part of the Glide Kip – transitioning from a hip extension in the glide swing to a Toes to Bar with short swings under the bar.

In this video, Carl and James continues with the next transition of the Glide Kip, bringing the body back into full hip extension from the toes to bar, by hanging while pulling the bar up back the legs to the hips.

In this video, Carl and James demonstrates the last component and drills the positions and movements to help you get over the bar into support.

In this video, Carl and James practice some drill to improve your technique for the Glide Kip with no load. This will help you practice your positions, coordination, and exaggerated movements so you’ll be ready for the real thing.

In this series Coach Carl introduces the Planche hold and goes through a number of progressions to help you find the proper positions and build up strength to achieve this movement.

In this first video, Carl breaks down the arm and shoulder positions focusing on wrist flexibility and locking out the elbows while developing shoulder strength in leaning forward. To challenging the position, Carl trains the same movement with feet on the box, feet on bands, or just one foot on the band for additional degrees of freedom.

In this video, Carl uses the teeter to get into a frog stand, and the works on separating the knees from the elbows to get exposed to loading the shoulders without flinching.

In this video, Carl continues to scale the loading of the shoulders, hip, and back by slowly lifting the knees off the ground, then the feet, and then flattening out the back to get exposed to the positional strength required for a planche.

In this video, Carl demonstrates how to work on building strength and control throughout full range of motion so you can get from a freestanding Handstand down to the Planche hold. Carl uses the squat rack and a band again and a variation of a Cast to Handstand drill to enable quick repetitions while allowing you to focus on slowing down the movement as you would to get into a Planche at the bottom.

In this video, Carl demonstrates how to build up your straddle hold while in hip extension with some bands. Getting a wide straddle hold is important as it is the first leg position you’ll be working on with your no-assistance Planche hold. 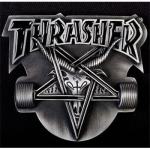 This is one of the wildest trips we’ve been on. Phelps, Figgy, Dustin, Nuge, TNT, and too many other dudes to name.

This tour becomes its own beast as the shows are crazier, the spots get gnarlier, and the crew grows bigger. Here’s the second and final installment of the best Skate Rock tour yet.