Nova União hasn’t been shy about voicing its ambitions. Their goal is simple: to return to the top of the Podium at the Mundials.

What’s not so simple is how they plan to get there. Without the aid of many of their top counterparts in Brazil, the team has to rely on its growing stable of US talent. Talent that has helped capture two IBJJF International Open titles for Nova União in just two weeks. Having played an integral part by leading the charge to victory in both Phoenix and Dallas, Gustavo Dantas black belt Steve Rosenberg is a shining example of how deep the talent pool is at Nova União’s stateside branch. 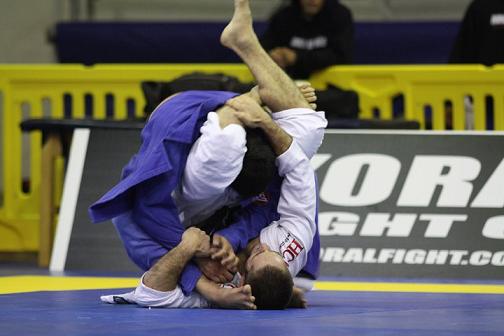 Having shown his mettle at earlier belts, through such achievements as winning the lightweight class in the 2009 Pan adult division as a brown belt, Steve is no stranger to competition. Belonging to what is considered one of the toughest weight brackets, he has been working hard to stand his ground as a black belt, a division predominantly won by Brazilians.

With the momentum from his back-to-back wins at the Phoenix and Dallas Opens, Steve isn’t planning on slowing down as he heads into the 2011 World Championship. Being only one in a handful of American black belts representing Nova União at the 2011 Worlds, Steve represents the caliber of the team’s US-bred competitors. Characterized by fierce loyalty, hunger to succeed, abilty to rise to challenges, and willingness to defend the team’s flag to the death, Steve has become the beacon of hope Nova União has been waiting for.

It’s the beginning of a new age for Nova União. With team unity playing a pivotal part in achieving its goals, Nova União is set to create a new squad of elite competitors to lead the team. Just as Robson Moura and Vitor Shaolin were part of Nova União’s elite during the team’s golden age, in the late nineties in Brazil, the team is ready to recreate its frontline with the American talents under Nova União’s main leaders in the US. Consider Steve Rosenberg ready for battle.